The Best Beaches in the World

The 40 shores across the globe that are inspiring all the wanderlust right now...

With the world on pause and sheltered in place, now is the time to dream.Yes, we will travel again—but for now, it's all about wanderlust. Whether you're dreaming of a quick weekend getaway, the ultimate surf, or spending this time at home to dream up the trip of a lifetime, a pristine beach is always a good idea. To get you inspired, here are some of the world's most beautiful beaches from South Beach to Sri Lanka.

Cut off from the rest of the mainland of Krabi province by high limestone cliffs, Railay Beach is only accessible by boat, making it one of Thailand's most peaceful and beautiful beaches.

Australia's East Coast is home to some legendary beaches—Whitehaven Beach in the Whitsundays is particularly heavenly. Over on the West Coast, Turquoise Bay in the Cape Range National Park is equally gorgeous. Just watch out for those sharks.

While the coastal section of Olympic National Park is rockier than it is sandy, it's still worth visiting Ruby Beach for the views alone.

Home to the Cinque Terre's only sand beach, Monterosso al Mare is the spot to post up for a long day of sunbathing on the Italian Riviera.

One of the best places for snorkeling on Kauai's north shore, the coral reefs at Tunnels Beach are suitable for divers of all skill levels.

Set upon the Jurassic Coast between Swanage and Weymouth, this natural limestone arch is the perfect secluded cove for your next Insta-worthy travel diary.

There are too many beautiful white sand beaches in Seychelles to even count, but Source d'Argent on La Digue is known for being one of the best.

The ancient Mayan ruins overlooking the white sand beaches and bright blue waters of Tulum feel a world away from Cancun, which happens to be just a two hour drive north.

The 235-foot-tall Haystack Rock dominates the shoreline of the Oregon Coast at Cannon Beach, which is also home to a host of art galleries and restaurants.

For those who prefer to get off the beaten track, let the gleaming gem of Cala Goloritzè be your reward. Accessible by boat or an athletic hike, this tiny beach is a dream spot for climbers (the nearly-150 meter rock spire just up the beach offer spectacular views) as well as for those who just enjoy a pristine private spot to lounge.

The massive sand dunes alone are reason to book a trip to Walvis Bay. But you'll also want to come to this beach on Namibia's Skeleton Coast for the wildlife—you're likely to spot flamingos, seals, whales and even hyenas here.

With the rise of tourism in Myanmar, there are plenty of places to stay in this beach town on the Bay of Bengal–but don't fear that it's lost its charm, it still maintains its sleepy fishing village vibe.

While San Francisco might not be the sunny beach town you would imagine to see on a list like this, Baker Beach is worth visiting for the spectacular views of the Golden Gate Bridge. Fair warning: the northernmost end of the beach is clothing optional. 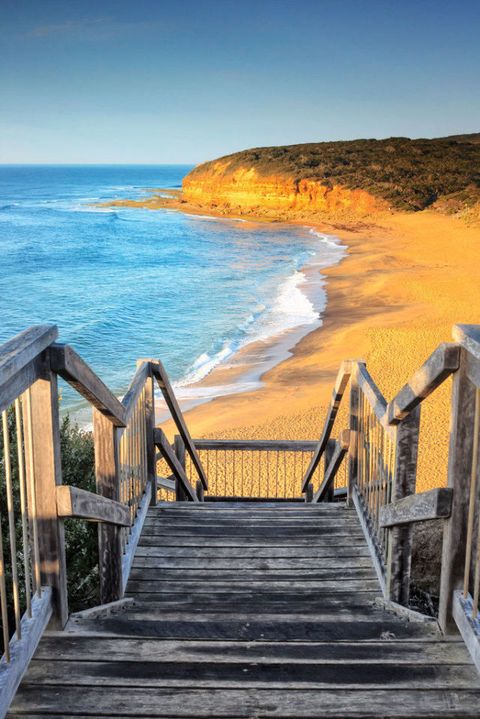 This sandy coast is home to the world's longest-running surf competition, and showcases some of the biggest rip curls you'll ever see. High cliffs provide a dramatic backdrop to the natural amphitheater of this gorgeous Australian oasis.

Large granite boulders line the coast at the southern tip of Virgin Gorda, forming shallow pools that make The Baths an ideal spot for swimming and snorkeling.

The luxe beach houses here might try to overshadow this coastline, but the beach itself is still the most beautiful part of this Cape Town suburb.

If you're looking for untouched beaches, head to southeast Sri Lanka to enjoy the wide open sands of Tangalle Beach.

Surrounded by cliffs, this small beach outside of Lagos is one of the most beautiful in Portugal's Algarve region.

Even though Trunk Bay is St. John's most visited beach, this quarter mile stretch of pristine white sand on the island's north shore is worth braving the occasional crowd. 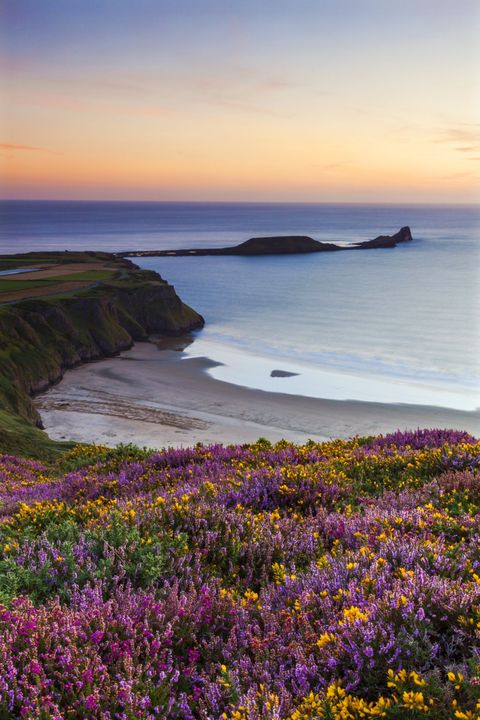 The UK has some gorgeous beaches—even if the weather isn't ideal for sunbathing. Rhossili Bay on the tip of Gower Peninsula in Swansea is particularly pretty–just look at those blooms.

It's hard to pick just one amazing beach in Hawaii, but Polihale Beach on Kauai's west coast is perfect for those seeking a bit of isolation and calm.

Don't think of Germany when you think of beach vacations? Think again. Located just off Germany’s northern coast in the Baltic Sea, Usedom Island is home to miles of white sand beach covered in classic wicker beach chairs that Berliners flock to in the summer.

After this secluded beach on Phi Phi Island was featured in the 1999 movie The Beach it became wildly popular with tourists. Visit in the early morning to avoid the crowds.

In the Hawaiian language, Lanikai translates to "heavenly sea" which is a fitting name for a beach with such calm and tranquil waters.

Known as much for its nightlife as it is for its white sands, South Beach is an easy weekend getaway for anyone living on the East Coast.

Greece and Italy might get more attention when it comes to Mediterranean beaches, but Turkey's southwestern coast is home to some beautiful options including the small sandy cove at Kaputas Beach. 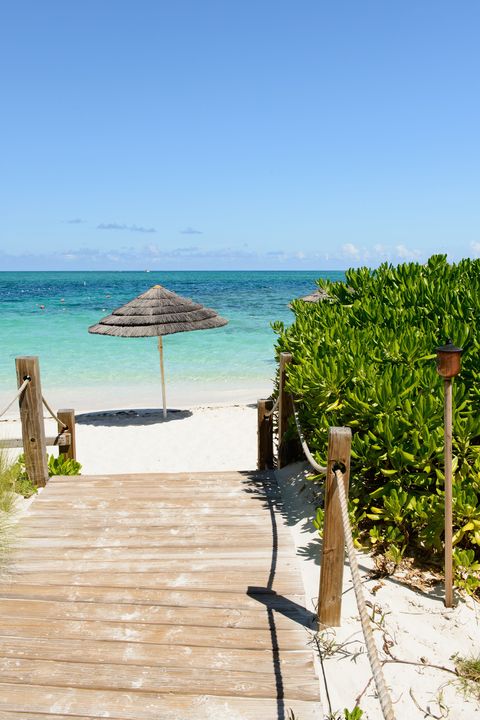 With 12 miles of white sand beaches and the clearest water you'll likely ever encounter, there's no question why this beach on the north shore of the island of Providenciales made this list.

If you're looking to go off the grid, head to this remote white sand beach on Espiritu Santo Island in the South Pacific.

An unusual site on the otherwise rocky coast of Easter Island, the white sand beach at Anakena is also home to several Maoi statues carved by the Rapa Nui people.

You'll need to take an hour-long boat ride to the Marietas Islands to get to this hidden beach off the coast of Puerto Vallarta, but the trek is worth it. Where else can you sunbath on a beach that is entirely enclosed within a cave that has a massive hole in its roof?

Costa Rica has over 750 miles of shoreline, but Playa Manuel Antonio on the Pacific coast is one of the most popular.

Iceland might not conjure up images of a beach vacation, but the black sand beaches of its southernmost town, Vik, are worth exploring.

Located on the southern coast of Brac Island, Zlatni Rat Beach is nicknamed the Golden Horn for its unusual shape that juts out into the Adriatic Sea.

Also called Tapuaetai, One Foot Island is exactly the place you want to be if you're looking for miles of secluded beaches

Located 200 miles off Brazil's coast on Fernando de Noronha island, Baia do Sancho is only accessible via boat or by hiking down a narrow staircase from surrounding cliffs making it secluded and virtually untouched.

Tucked away on the northern tip of Palawan island, El Nido is home to off-the-beaten path beaches surrounded by limestone cliffs. 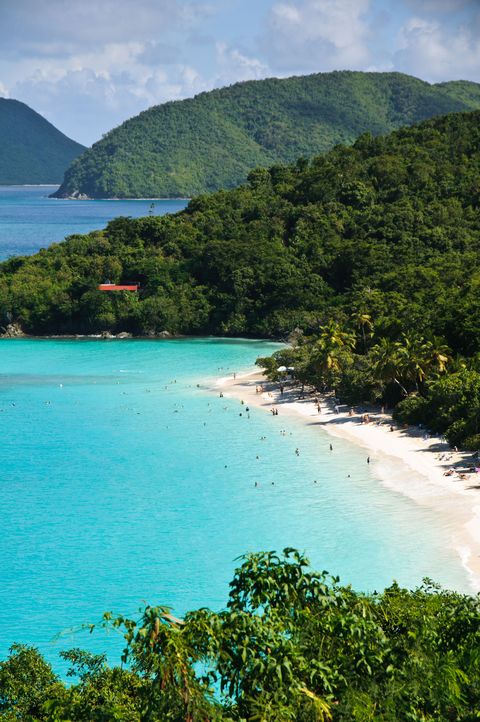 Less bustling than neighboring Trunk Bay but equally beautiful, Maho cements its status as one of the U.S. Virgin Islands' finest white sand beaches. The calm, relatively shallow waters are also a prime feeding ground for sea turtles and rays, making it a thrilling spot for snorkelers of all skill levels.

According to Maori legend, the marble-like Moeraki Boulders on Koekohe Beach are the remains of the ancient Araiteuru canoe that crashed into the Otago coast.

While it isn't the easiest to get to, Cabo San Juan de la Guia Beach in Tayrona National Nature Park is worth the trek through the jungle to get there.

Located in a remote cove on Zakynthos in Greece's Ionian Islands, Navagio Beach gets its nickname—Shipwreck Beach—because of the ship that ran aground here in the 1980's.